While trying to change out of her wetsuit into dry clothes, Bomb Waves founder Van Ly thought to herself, “There’s got to be an easier way.” She took to surfing the web and was unable to find anything that caught her eye. So, with little experience she purchased a sewing machine, some fabric and jury-rigged her own changing towel. And just like that, the Bomb Waves changing towel journey began…

Bomb Waves was founded in 2018.  Van wanted to design changing towels with personality, to match the not-so-average adventurers.  She launched the company with just an adult option and quickly received feedback from consumers, requesting a children’s line.  Bomb Waves continues to evolve, with products that provide convenience for the outdoor enthusiast.

Van Ly is the owner of Bomb Waves and head of design.  Van is Vietnamese-American, born in a Thai refugee camp and raised in the Northern Bay Area.  She discovered her passion for surfing later in life and soon after that, the need to cover up.  Knowing little about designing apparel and how the fashion industry worked, she set out on an adventure.  Ultimately, what she learned was, you get to design your life the way you want it. 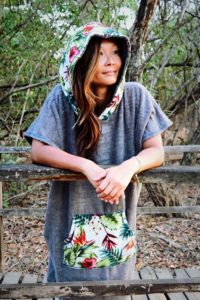 Ocean Love: The ocean produces 50% of the world’s oxygen and stores more carbon dioxide than our atmosphere.  Ingredients from the ocean can be found in more than just seafood, such as peanut butter and soymilk, as well as medicine that help fight cancer, arthritis, Alzheimer’s disease and heart disease.  It is imperative that we keep our oceans clean.

Adventure: The world is full of experiences waiting for you to explore and learn from.  Whether it’s within your community or across the globe.  Get out there and Live Your Life!

Growth: Striving to become the best possible version of ourselves, makes the world a better place.  Finding your passions and seeing progression, gives motivation and a sense of excitement.

Harmony: We are more similar than we are different.  Connecting with the community and the people around us help make our environment a better place.